Welcome to the third and final entry in this conversion series. I expected to publish this 3 months ago – but life got in the way! Better late than never, though….

There are only two designs from Lavender & Lace that use the 2100 “Robin’s Egg” Needlepaints series, but both rely heavily on them…and in both cases, they are used in conjunction with the 2001-2006 Lavender Blue series. So, we will be keeping that in mind as we explore this color conversion.

It’s not too bad, all things considered.

It’s too green, all the way through, but especially on the dark end, but it’s not irredeemable. And if you’re stitching pine boughs (like on Secret Santa), you’re likely to be happy with the result.

If you’re stitching Celtic Summer, I personally would err on the side of blue rather than green. So let’s explore our options in that regard.

A Flash of Blue Silk

Probably not a surprise, there is no blue conversion in DMC or anchor that is remotely satisfying. So, over to the silks we go. Again, Needlepoint Inc is my go-to, since their luster is subtle, dye lots are relatively stable, and they make complete sets of shades.

Here, I think your main choices are Williamsburg Blue, Jade, or Iris Blue – or some combination thereof.

Iris Blue is definitely Blue. Jade is Green and rather bright in the midtones, though an excellent match on the light and dark ends. Williamsburg is very nice in the deeper tones but a little gray on the lighter shades. But there are definitely some choices to work with here.

But how do they play together?

Here is a look at the original combination of Needlepaints 2000 and 2100 series. It’s good to understand the goal!

And here’s a look at two potential substitutions – the DMC cottons and a mix’n’match Needlepoint silk with Celtic Summer in mind. Bear in mind the silk comes with an extra cost – it’s about $5/skein at this writing. So, choose what works for you!

So What’s the Upshot?

Well – you have choices, and you can’t go too far wrong sticking with the recommended cottons. If you purchase a kit from us, you can expect us to substitute as follows:

And that’s a wrap! I hope you enjoyed this conversion series. Be sure to check out the other two posts in the series: 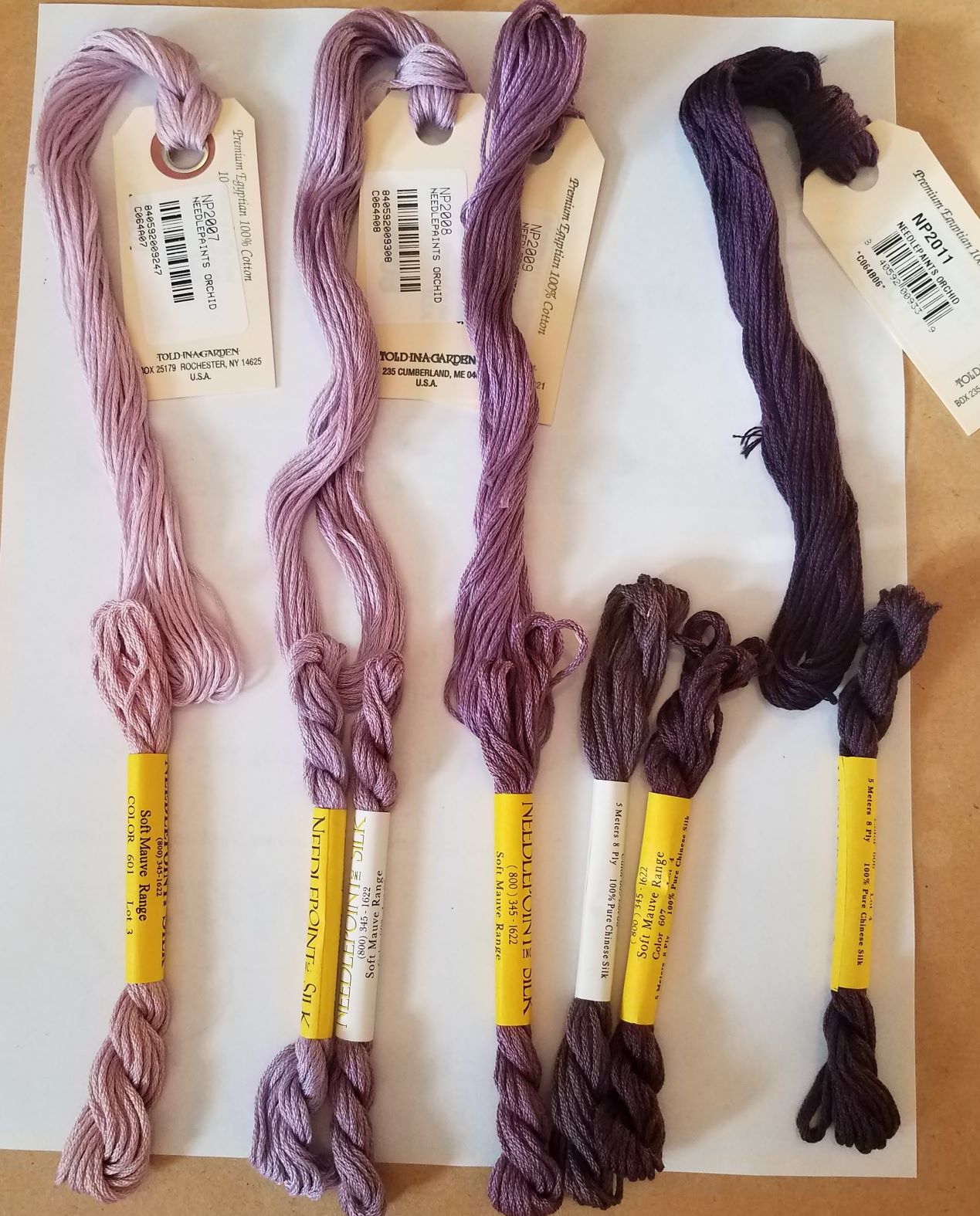 Welcome to the second part of our three-part series on Needlepaints conversions! Today we will be tackling the Orchid range. Be sure to check out the first post about the 2001 – 2006 series.

The 2007 – 2011 “Orchid” series is used in a number of designs, but mostly is used for a few flowers here or a ribbon there. There’s one design where they play a starring role, though – Angel of the Morning. The Needlepaints shades are central to how she seems to rise into the light from the deep dusky night. I have to believe Marilyn Leavitt-Imblum created these colors with that specific design in mind.

I’ll reiterate my endorsement of Rainbow Gallery threads for their quality. Splendor is a 12-ply silk, and Mandarin is a 6-strand bamboo fiber.

The color conversion is decent. The lighter shade is more lavender than orchid, and the dark shade is brighter and purpler than the corresponding Needlepaint.

Because of the change in fibers (DMC & Needlepaints are both cotton) from cotton, to silk (shiny), and then to bamboo (matte), there will be a difference in both thread weight and sheen when using these substitutions. It is only noticeable upon close inspection, but it’s there.

As with the Lavender / Blue range, this color conversion is not close enough to permit single-substitutions – you will have to go “all or none”.

And that brings me to an important point – this color range, even though it is only 5 shades, twists. NP 2007 has an almost pink cast to it. NP2008 forms a bridge into NP2009 which is a a dusty orchid purple, which deepens to NP 2011 which can be described as a rich, dark grape – a deep purple wine color.

And that is the biggest challenge with this conversion. The originals have a warmth that many of the suggested replacements lack… including these.

The upside of this conversion is that it has the designer’s stamp of approval. And Rainbow Gallery makes nice threads. It will feel special.

The downside is that it’s purple. Color-wise you can do as well with cotton. Like so many of the others we will explore here, it lacks the depth/warmth of color of the originals. This one involves mixing & matching fiber types. Finally, these can also be hard to source, especially if you don’t have a local needlework shop to special order them for you.

The third image is the Anchor 95 – 102 series which is occasionally mentioned. As you can see, 95 is all right but it gets very bright and very purple quickly. If you’re stitching the flower wreath of the Spring Bride I think this would be an excellent palette to choose from. If you’re stitching Angel of the Morning, I think it’s far too bright.

After all of that, if you’d like to stick with cotton, one of these – or a blend – is where I would land.

DMC 154 anchors both of these conversions on the dark end. On the left is Anchor 95, 870, 872, 873, and DMC 154. You could maybe blend some 96 or DMC 3836 into the 870 to liven it up a bit. It has the duskiness needed and moves nicely to the almost-pink lightest shade. On the right is an equally nice DMC option – it’s a little brighter but depending on your preference that may not be a negative. If I was going to do Angel of the Morning in cotton, I would use one of these conversions.

Silk, How Do I Love Thee?

As I mentioned above, the thing that gets me about this color range is the twist. I ran through all these cottons and I had not captured it quite to my satisfaction.

I had to dig into the silk.

This is Needlepoint Inc stranded silk. The base of this conversion is their Soft Mauve range, though I do like the addition of a Wisteria blend for NP 2008. This set, in my opinion, would do the Angel of the Morning justice. It twists the same way as the Needlepaint series, starting with an orchid pink and turning through dusty purple and into deep wine. To get there gracefully in just five shades (the NPI range has seven) I would do some blending.

Bear in mind that it is silk, so it will have more luster than the cotton around it, though NPI is on the subtle side for sheen. I don’t necessarily see this as a negative for the Angel of the Morning – if her cloak shines a bit, all the better.

In conclusion – if you purchase a Lavender & Lace pattern kitted up from us that calls for the Orchid Needlepaints, we will send you whatever we’ve been able to get a hold of for Needlepaints. For those that are out of stock, we will substitute as follows:

If you buy Angel of the Morning, where these play a starring role:

If you buy a design (Spring Bride, Angel of Healing) where they are supporting actors:

I hope this encourages some of you to tackle Angel of the Morning. She is, in my opinion, Marilyn Leavitt-Imblum’s most spectacular angel, even more meaningful because of her post-9/11 release. Her colors are absolutely stunning, and you can still do them justice with threads we have available today. 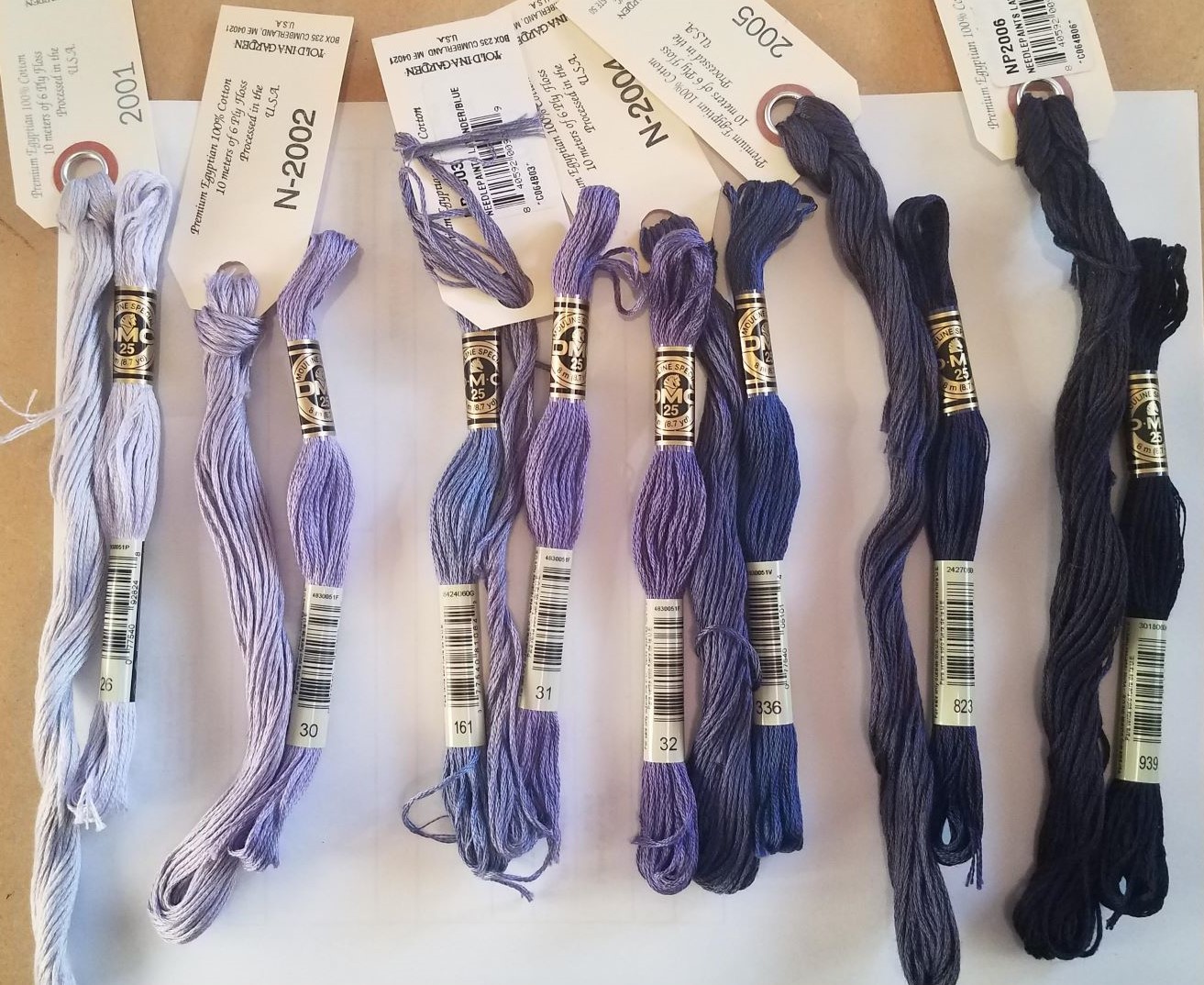 Needlepaints have been in short supply for what seems like forever. What is a Lavender & Lace enthusiast to do? There are various color conversions floating around on the internet – including one sanctioned by Marilyn Leavitt-Imblum herself – but as someone who has stitched the Celtic Ladies with the “real deal” Needlepaints, so many of these conversions are… unsatisfying.

You are going to spend months stitching a Lavender & Lace design. You are going to frame it and hang it and stop to admire it repeatedly for the rest of your days on the earth. (I do, anyway). You’re going to want it to look “right”.

Since I have the benefit of being a shop owner and am surrounded by colors to choose from, I’m going to take you through some options and their pros & cons, from my point of view.

This is the first in a 3-part series on color conversion options for Needlepaints! Part 2

Let’s take it from the top.

In terms of a color conversion, it’s OK. The Rainbow Gallery threads are definitely more blue than lavender, and it’s rather a shame there isn’t one more shade of Splendor deep enough to match 2006. The M896 feels like a compromise – “this is the closest we have, so that will have to be it”. It’s not quite dark enough and it’s a little “off” in color compared to the other substitutions, too. This color conversion is not close enough to permit single-substitutions – you will have to go “all or none”.

Because of the change in fibers (DMC & Needlepaints are both cotton) from cotton, to silk, and then to bamboo, there will be a difference in both thread weight and sheen when using these substitutions. It is only noticeable upon close inspection, but it’s there.

Con: Color-match is just middling, especially at the dark end. Involves mixing & matching fiber types. These can also go in and out of stock.

The dark end of this conversion (NP 2006 to DMC 939) is pretty good. But it falls apart in the lighter shades.

3743 doesn’t match the other DMC suggestions at all. The transition from 3743 to 160 will forever be jarring.

That’s not to say that if you use this conversion, your work won’t turn out lovely. You could convert to any number of different colors. Marilyn’s designs will always be lovely.

But the fact remains that she went to the trouble of creating Needlepaints because the colors she envisioned weren’t available in DMC.

And she wasn’t wrong.

Pro: DMC threads will match the rest of your project in thread weight and sheen. They are widely available and you may even have them in your stash already.

Con: I don’t like the color match or series. I just don’t like it. Call me a snob if you will – it’s just not for me.

When we got our first shipment of the 2020 DMC colors (01 – 35) the first thing I did was dig through for potential Needlepaint substitutions.

And finally, I think we can actually get close. Behold.

That said, if you hate blending, you’d probably not know the difference. You could directly substitute 31 and 32 for NP 2003 and NP 2004 in series – and I even think you could mix and match.

Not within a color (e.g. don’t start off with NP 2002 and switch to DMC 30 mid-stream). But you could certainly use what Needlepaints you have been able to source (we currently still have NP 2001 in stock, much good as it is without the others!) and substitute DMC for the others.

Pro: DMC threads will match the rest of your project in thread weight and sheen. They are widely available and it’s a great excuse to pick up some new colors. The color match is pretty good especially at the light and dark ends.

Con: There’s still nothing exactly like NP 2003 and NP 2004. It’s probably not a coincidence that those two have also been the colors that have been the most challenging to keep stocked / manufactured over the past 15 years.

I am excited to finally have a DMC color substitution that I can whole-heartedly recommend for these designs. If you purchase a Lavender & Lace pattern kitted up from us, you can expect that we will send whatever Needlepaints we have been able to get our mitts on, for those which are out of stock we will substitute the 2001 – 2006 Needlepaints series with DMC as follows:

I hope this helps you lovely stitchers out there, and inspires some of you to take up these stunning designs! Stay tuned for our recommendations on the 2007 – 2011 and 2101 – 2106 series.